Ode To An Old Skirt

Cynthia:  I keep my clothes forever. This is a Corey Lynn Calter skirt that I bought from Anthropologie in spring of 2001.

But, it was $88. Oh my gosh. Eighty. Eight. Dollars. That was a fortune for this theatre actor/waitress. To spend that much money on a skirt was… scandalous!

Every day for a week, before my play rehearsals would start, I would walk over to the Anthropologie store on the Third Street Promenade in Santa Monica and agonize over whether I should buy it.

Finally, my fashionable but frugal castmate kind of gave me permission. She said, “buy it.” So, I bought it. (It is possible she got sick of me talking endlessly about a skirt while she was trying to memorize her lines.)

It only took about two seconds to get over my guilt. I wore it constantly for the first five years and still take it out a few times every year. It has held up remarkably well.

And that is what started my love affair with skirts from Anthropologie.

Although I still think $88 is a lot of money to spend on a skirt.

Marcy:  Think of how many cans of Friskies you could buy with $88.

Cynthia:  There are a lot of things we could do with $88. (warning) Don’t make me feel guilty, Marcy.

Marcy:  No worries. You do that to yourself.

In Love With Lavendel 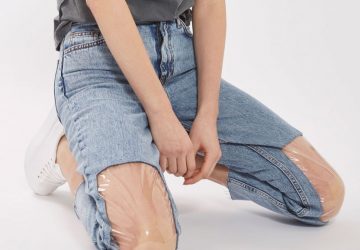 Clear Knee Mom Jeans Are Not A Practical Joke