Cynthia:  Yay! Our show, Telenovela Wives of Pancho Villa, by Jeffery Atik, has opened to sold out audiences!

Cynthia:  We spent $300 costuming thirteen actors. It’s a mix of the actors’ own clothes, thrift shop finds, and Forever 21.

The year is 1914 during the Mexican Revolution. The play is a fictionalized satire of the lives of Pancho Villa’s many wives done in the Telenovela style. Think soap opera, comedy, high drama, intrigue, and The Real Housewives shows.

Dona Luz, who was Pancho Villa’s first wife, is the heart of the show.

Cynthia:  Our Dona Luz is played by the super talented Kazandra Santana.

Cynthia:  Kazandra as Dona Luz was my first outfit find and we built the show around this costume.

I was lucky that Forever 21 has long skirts and old fashioned type tops that are lightweight and inexpensive. And sexy. Our idea was to evoke 1914, not literally translate it with period costumes. It is a Telenovela after all!

This dusky pink was perfect and Kazandra looks elegant and beautiful. The belt is her own and gave the outfit a rustic element.

Kazandra Santana brings such depth, grace, humor, outrage, conniving, and sexiness to her role that I am sure the real life Dona Luz would be thrilled to pieces.

Marcy:  I don’t know. The real life Dona Luz looks pretty fierce. She doesn’t look like the kind of lady who would be thrilled to pieces about anything.

Cynthia:  She does seem pretty formidable in this photo. Hey! Maybe she needs a cat.

Styling The Wives Of Pancho Villa (Paula Rebelo as Juanita) 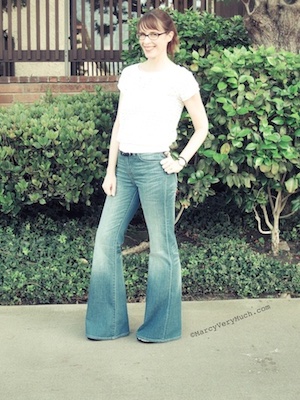